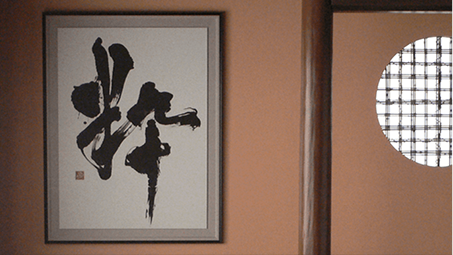 Shodo (Japanese calligraphy) is the art which can express kanji and hiragana by using brush.It is great traditional Japanese culture .When I concentrate on writing shodo, I can be true to myself slowly, feel relaxed,calm and I can give an impression and power to an audience and client by putting my heart and soul into my works.

Shodo has amazing power. I have been fascinated with this world,which is deep history,profound and never ends, for 27 years.

Actually, there are 3 ways to call shodo. I introduce for the difference .

In Japan, there are customs which we think a great deal of the meaning of the letters and write letters precisely beautifully to express the feelings to somebody by writing letters . So we learn to shodo obligatorily at elementary and junior high school.

In the class, We also learn to focus on mental concentration and working on a task. However, it's too difficult for children to keep quiet during the class. So we exactly called shuji when we learn to calligraphy at our childhood. We put emphasis on learning how to write letters precisely rather than art .

Shodo is the art which is put emphasis on expressing beauty of letters generally. Calligraphers try to complete to make works without the examples because they have to express our individuality and train to be appreciated. So shuji is next step to shodo. I'm a qualified calligrapher but think of that I have to practice harder and harder.

Sho is much more artistic expression than shuji and shodo. Originally, I think professional calligraphers use this word and have to have a rich spirit and learn many kinds of expressions of lines for the complete of the work. 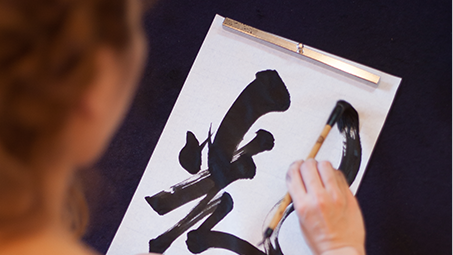 Shodo is the art, which is based on material of letters.In Japan, letters are not only shodo, but mainly written in kanji and hiragana.

Kanji originated about B.C. 1550 in China. It is said that the hard surfaces of animal bones, tortoise shells and stones began to be inscribed with sharp instruments to produce documents for administrative purposes or with statements or predictions from the gods.Then kanji in the Chinese tradition was introduced to Japan in A.D. 348. 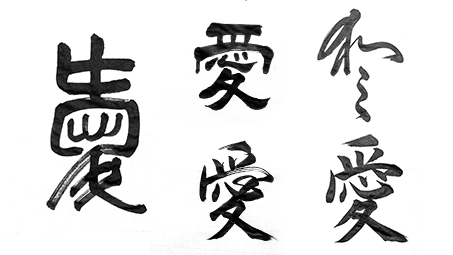 There are five basic styles like fonts commonly used in Japan today for writing kanji. They are 篆書 Tensho (seal style), 隷書 Reisho (scribe’s style), 草書 Sosho(cursive style), 行書 Gyosho(semi-cursive style), and 楷書 Kaisho(block style), which all appeared in China before the end of the fourth century. They have been changed the styles, which are in the order of Tensho, Reisho, Sosho, Gyosho, Kaisho along with stream of time. (There are also other theories.)

Because of that, the older font the more stroke count and they take a lot of time to write on. It’s not appropriate to write them fast. So that’s why kanji has changed more practically. 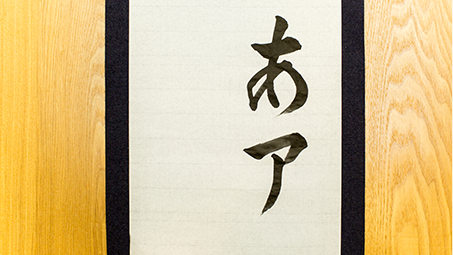 We Japanese usually use katakana to write loan words which were handed down to us from western countries. 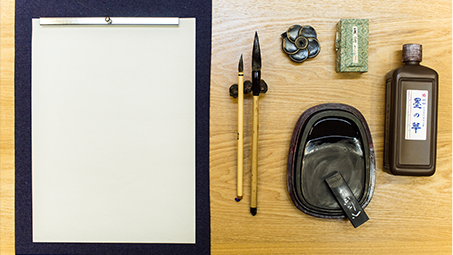 Brush, ink, the grinding stone and paper are the important instruments required in shodo done with a brush and they are collectively called 「文房四宝」(“Bunboshiho”). 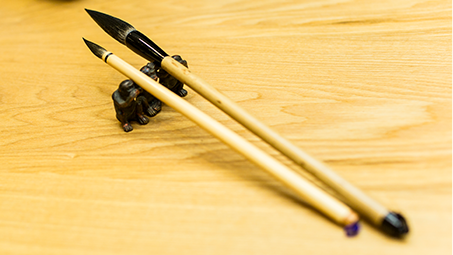 Brushes are composed of various types of animal hair and to write shodo. They are the difference of hair length and thickness. Kumano brushes and Toyohashi brushes are famous for the traditional crafts. They are valuable because craftsmen make each brushes by handmade and the brushes are used depending on the works. 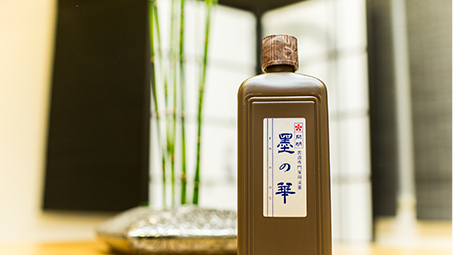 There are 2 kinds of ink, stick type and liquid type. The stick type is made of mixing soot with nikawa (glue) and incense. The liquid type is called bokuju in Japan. Recently, the liquid type is used as practice and the stick type which can express beautiful and rich black, is used for displaying a work at an exhibition. The types of black inks are slightly different. Their colors are brownish, purplish, bluish, etc and possible to dilute with water. 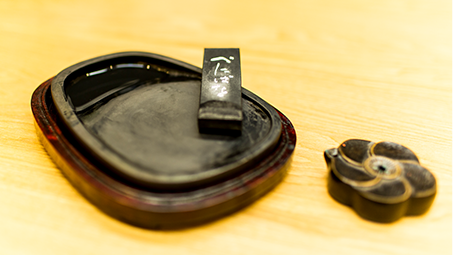 In shodo, suzuri is an essential tool to show beautiful black color. There are many kinds of stones in suzuri. Especially, tankei in China is well-known. But there are the different types of the stones. So if you think of showing favorite color of ink, you need to choose the stick ink and the grinding stone which can grind molecules fine or rough. 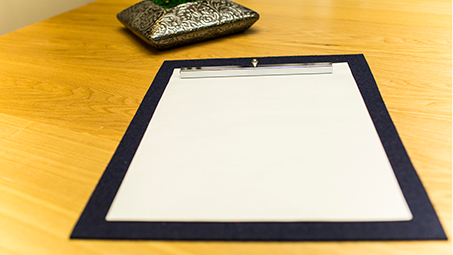 Washi is made of fibers which are obtained from plants called kouzo, mitsumata. Even only white paper, there is a variety of washi which is sold in calligraphy shop. For instance, white paper is close to ivory or pure white and more. Some paper includes patterns or gold leaves and so on.

Recently, we can type the letters easily and fast because of the spread of computers. However, there are many Japanese people who dream of writing letters beautifully. That means we Japanese think a great deal of the meaning of the letters and know handwriting letters are valuable. We put our heart and soul into writing gracefully and beautifully because the Japanese unique culture carry on.